“Noam Chomsky’s backpocket classic on wartime propaganda and opinion control begins by asserting two models of democracy—one in which the public actively participates, and one in which the public is manipulated and controlled. According to Chomsky, “propaganda is to democracy as the bludgeon is to a totalitarian state,” and the mass media is the primary vehicle for delivering propaganda in the United States. From an examination of how Woodrow Wilson’s Creel Commission “succeeded, within six months, in turning a pacifist population into a hysterical, war-mongering population,” to Bush Sr.’s war on Iraq, Chomsky examines how the mass media and public relations industries have been used as propaganda to generate public support for going to war. Chomsky further touches on how the modern public relations industry has been influenced by Walter Lippmann’s theory of “spectator democracy,” in which the public is seen as a “bewildered herd” that needs to be directed, not empowered; and how the public relations industry in the United States focuses on “controlling the public mind,” and not on informing it. Media Control is an invaluable primer on the secret workings of disinformation in democratic societies.”
( https://www.penguinrandomhouse.com/books/213835/media-control-by-noam-chomsky/) 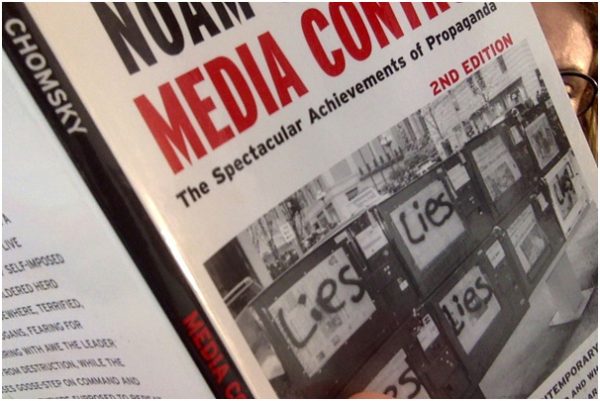 We all know Noam Chomsky and those of us who don’t, they should. I do not like to put labels on people, for me there are those who manipulate others, those who suffer from the manipulation, and those who fly below the radar to survive.
“Manipulation”; what an art.
I will use Dr.Chomsky’s example in his book. Business, for example. Found
another way of labor destruction besides violence, during the 1937 Steel strike in Pennsylvania. They tried to turn the public against the strikers. This technique was later called “Mohawk Valley formula”.
“We’ve got to stop them so we can all live together…..” because “they are disruptive and causing trouble and breaking harmony”. “Who can be against that? Or harmony?” (p24-25)
In other cases, the propaganda experts managed to turn a pacifist population into a “hysterical, warmongering” one.
Chomsky claims that when state propaganda is supported by the educated classes with no deviation, then it is bound to have an impact.

In this book, Chomsky discussed what the intellectual elite can achieve when used for other purposes besides social justice.

The book is mind-blowing.

They can troll themselves better

Salt to the Sea