Wordsworth and Shelley were both Romantic poets. They both praise nature’s powers and derive inspiration through it. A common element they share is the “emphasis upon the powers and terrors of the inner imaginative life” (Watson, 2012,p3). They both shared a common anxiety over humanity’s evolvement at nature’s expense and their poetry reflected their own experiences and perceptions of the world as it progressed at that time echoed in the personal pronouns they use in the below poems to express and discover their “self”. However, through the analysis of their poems it will become evident that there are also differences in the way these poets perceive the word.

The obvious differences between Shelley and Wordsworth lie in the technical details of the poems regarding type of poems, their rhyme and metre “Composed Upon Westminster Bridge” is a short poem in iambic pentameter with 14 lines whose structure resembles the Italian sonnet’s. This poem is simple in its diction and lexicon for all people to understand “lyric” (Watson, 2012. The simplicity of the poem gives space for individual interpretation of the poet’s experience and allows readers to perceive the poets impression of that experience and the way it is embedded in his memory and self-consciousness. The simplicity is demonstrated through the simple rhyming structure abbaabba CDCCD. However, “by” in line 2 does not rhyme to “majesty”.

“Earth has not anything to show more fair:”(bold letters for the stressed syllables, line 1 while in line 4, “This City now doth, like a garment, wear”.Perhaps the majesticity of the scenery is unparalleled for the poet therefore it cannot be put into a poetic restrictions and stands on its own.

The lines follow the iambic pattern of 5 stressed and unstressed syllables but not all lines follow the same pattern giving an air of freshness, freedom “The river glideth” alludes to the fresh water flowing freely to the slow beat of the scenery sleeping heart, line12) and unrestricted inspiration to the description. While the poem does not contain many figurative elements that usually make it more musical such as assonances or consonances, the poet’s emphasis on the feeling he holds for the sight is given through the abundant punctuation marks and the enjambments .The poet’s immense awe and admiration for this sight through enjambments is demonstrated in lines, 2,4,6,7,10,11,12.The feelings of excitement are so uncontrollable that cannot be limited to a single line. Enjambments also give the illusion of narration and the caesuras (4,5,6,7,10,11,12) the opportunity for both the poet and the readers to enjoy and reflect upon the beauty of this sight that has inspired the poet so immensely.

Wordsworth, as the title states, is describing London as part of nature from Westminster Bridge early in the morning while the bustling city seems “asleep” (line 13). In this short poem he describes his awe towards the greatness, beauty and serenity of nature which even the city of London is attuned to. He chooses a sonnet to express this spontaneous inspiration and his feelings towards this experience as an instance of the sublime. 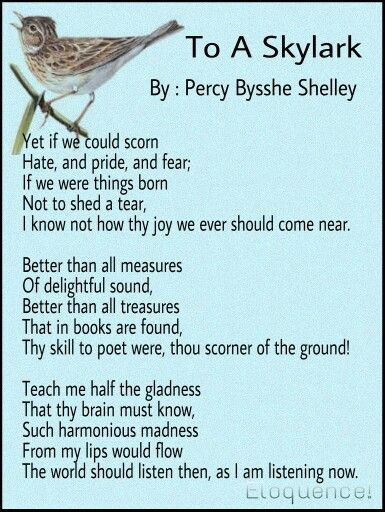 Shelley’s ode, “To a Skylark” (Shelley, in A230 Assessment Guide, 2016) might be a different genre of poetry since it is not a Wordsworth’s sonnet and contains 21 stanzas, but it resembles its simplicity. Shelley’s choice of using the ode is his association with the reputation as being “an elevated being” (Allen and Spencer, 2012, p41) out of this earth, he had to choose a superior art of poetry, the one that Romantics considered as the most representative to describe perfection and divinity, closer to the classics. As mentioned before the metrical pattern is simple, ababb , in trocaic metre that changes into a sestina iambic metre in every  last line of each stanza. Along with   the iambic pentameter there is another unordinary element in his sound pattern, that of the “half-rhyme” (lines 67-9, Allen and Spencer, 2014,p48). The iambic pentameter adds musicality to the poem and alludes to a bird’s song rising from the sky while the half rhymes add the element of divine and “airy”( Allen and Spencer, 2012).

Therefore both poets, although they use simplicity in language since the both wanted their poetry to appeal to all people since it belongs to all people, a common belief that all Romantics share, there are important variations within their poets, that makes them unique.

By focusing on the poem’s sound patterns, although both poets derive their inspiration from nature and their need to be closer to it through isolating themselves, another romantic element, there seems to be a difference to what each poet wants to emphasise and how he perceives and formulates his inspiration. For example, Wordsworth did not use many musical devices in his poem like assonances or consonances like Shelley did but he used punctuation and enjambments giving the reader the feeling of anxiety and hastiness of catching that moment before it disappears, before the city awakes and everything is lost. The use of personification and metaphors by comparing the city as a sleeping person, add an autobiographical dimension to the poem which make it more “powerful culturally” (Watson, 2012,p18). Therefore, it can be inferred that Wordsworth focus was to eloquently describe his experience through his eyes or memory since he re- edited his poems. He tells his readers where he is not only with the title of the poem but also using hints just like “the river, domes, theatres, ships ”. He can have a full view of the scenery he describes from where he is and considers “Dull” anyone who fails to understand the magnificence of that moment.

Shelley, on the other hand, gives no hints of where his location is when his inspiration evokes the skylark. His reading is not biographical like Wordsworth’s. His poem is inspired by the elements of nature using alliterations “silver sphere”  (22), “sunket sun” (12), repetitions “higher still and higher “ (6), similes “Like a cloud of fire; (8) and consonances  “And singing still dost soar, and soaring ever singest. (10), all contributing to creating a magical and divine description of a relaxing and exciting atmosphere as the bird rises the sky that makes a person’s soul filled with happiness and blissfulness.

However, besides their description, he goes further than that by adding a didactic and philosophical perspective also achieved through the use of vivid imagery, similes that will be analysed below.

“Teach us, Sprite or Bird,

What sweet thoughts are thine;

I have never heard”

“Yet if we could scorn Hate, and pride, and fear;

If we were things born Not to shed a tear,

I know not how thy joy we ever should come near.

Comparisons between the two poets can be made in the use of figurative devices. Wordsworth uses personification to give life when he personifies London as since it has a heart that its beat we can feel and wears garments, the sun, the river, and the houses that are asleep. Shelley compares the skylark to something divine; to a spirit “Sprite” (61) that is so perfect that mirrors people’s imperfections. Its songs are always joyous in comparison to people’s who contain sadness. The rich imagery and the continuous use of similes (48,41,51) come to a complete contrast to people’s emptiness “empty-vaunt” (69). This is where the poet philosophises on life and his need to be healed by the skylark’s (symbolism to nature’s power) perfection and soothing powers even when it is not visible in the sky anymore, becomes evident. Having in mind Mary Shelley’s words about him “forgetting…regret and lost hope through poetry” (Allen and Spenser, 2012,p47) it can be inferred that Shelley’s spontaneous inspiration comes from his need to find consolation in nature’s arms and he wants to discover himself through it as well as advising the world to do the same “The world should listen then – as I am listening now” (105). While there is a tone of nostalgia and need for the quietness and desire for isolation from the polluted and noisy city in Wordsworth’s poem, there seems to be the desire for absolution in Shelley’s “To a Skylark”. Perhaps the Skylark is what every person desires but it cannot be attained but can only be observed and admired.